Pictures of St. George usually show him killing a dragon to rescue a beautiful lady. The dragon stands for wickedness. The lady stands for God's holy truth. St. George was a brave martyr who was victorious over the devil.

He was a soldier in the army of the Roman Emperor Diocletian, and he was one of the Emperor's favorite soldiers. Now Diocletian was a pagan and a bitter enemy to the Christians. He put to death every Christian he could find. George was a brave Christian, a real soldier of Christ. Without fear, he went to the Emperor and sternly scolded him for being so cruel. Then he gave up his position in the Roman army. For this he was tortured in many terrible ways and finally beheaded.

So boldly daring and so cheerful was St. George in declaring his Faith and in dying for it that Christians felt courage when they heard about it. Many songs and poems were written about this martyr. Soldiers, especially, have always been devoted to him.

We all have some "dragon" we have to conquer. It might be pride, or anger, or laziness, or greediness, or something else. Let us make sure we fight against these "dragons", with God's help. Then we can call ourselves real soldiers of Christ. 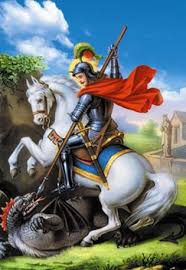 Martin was born at Savaria, Pannonia (Hungary) in 316. His father worshipped the pagan Roman Gods but Martin was curious about the new Christian religion, which had been legalised in 316. Martin converted to Christianity, as did his mother, but his father disapproved and remained a pagan. Martin followed his father's career and joined the Roman Army when he was fifteen years of age. Martin was stationed in Amiens, Gaul (modern France) in 334. Martin is strongly associated with the Legend of the Cloak. The legend tells that Martin, the Roman soldier, cut his own military cloak in half and shared it with a scantily clad beggar. Martin was then baptised in the Christian faith and continuing serving as a Roman soldier until it became apparent that this career was at odds with the teachings of Christianity. He resigned his post and was imprisoned as a traitor and coward but later released. He then moved on and lived his life as a hermit. Martin then lived in the city of Tours, where he became a disciple of Hilary of Poitiers and together they established a monastery. In 371 Martin was appointed by the will of the people as the bishop of Tours. 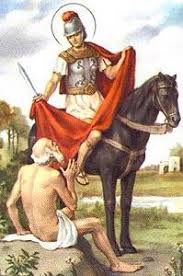